7 Comments
By lisatemp Green Thumbs Up

We have implemented “Operation: Kick the Yard’s Ass.”

A couple weeks ago, we interviewed some landscapers, one of which we’re planning to hire in October to helps us rebuild all the extensive stonework in our yard and tackle some other taxing manual labor that we just really don’t want to do. Maybe re-sod all of our raised lawn, yada yada…

But in order to justify spending money on that, we’ve decided that we need to suck it up and clean up ALL the rest of the crap the previous ASSHOLE owners of the house left us. And believe us, though we’ve been out there working pretty much every weekend since we moved in, there’s still a lot of crap.

So, Step 1 in Operation: Kickass? Buy a suite of brand-new kickass yard tools:

Step 2? Devote 1 – 2 hours every day (yes, every day: and so far, for the first week of the operation, we’ve been successful at this) to attacking the things we don’t want in the yard. This is where Jenny, the landscaper we liked, was helpful — she suggested what should stay and what should go, and what we might do until October when she and her team can fit us into their schedule to tackle the stonework.

Last night, as a finale before departing on our Labor Day adventure up at Lake Almanor, Trent successfully completed murdering half of the creeping monster growing by the side of our raised lawn. We actually thought it was a bush, but nope — it was actually just a vine that the previous assholes had merely allowed to grow into a giant tangle that looked like a bush, but tortured us constantly with its resistance to taming of any kind.

And I completed my first stab at saving our iris gardens. They were so overgrown with weeds when we moved in that I assumed they were just dead and would need to be cleared for the compost bin. Jenny taught me that they just needed to be cut down properly and the weeds combed out, so I gave it a shot… 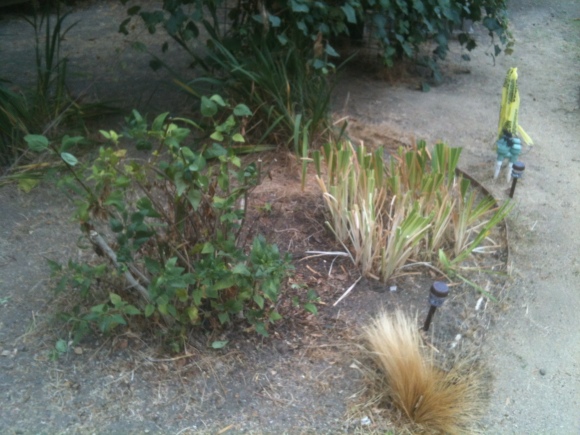 The first stand of irises trimmed by me. I also had to free them from that dastardly bush to the left, but supposedly it will grow back and produce some lovely pink flowers… We’ll see?

Thank god for Youtube, is all I have to say on that one. I think I did this 100% correctly, except for the fact that it’s a little early in the year for an iris haircut. BUT — there was a lot of weedy debris in there choking the plants and it needed to be cleared. This was the only way it could be done, so please, irises — stay strong and come back next year.

Next week, while Trent murders the other half of the vine monster (which I’ll document in all its glory, don’t worry), I’ll go on to the ten other iris beds in our yard: 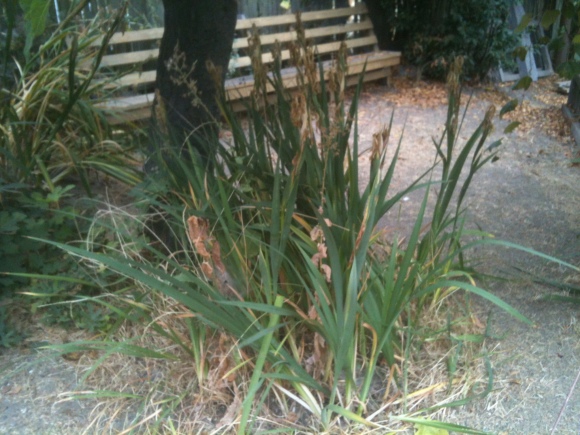 Then we’ll get ready to…

All of the planting and the fun stuff will come next year, in spring, when the ground is soft and we have rain. Right now, it’s about battening this baby down, weed-free, before winter. We’ve learned that to be good, organic gardeners, we have to work on nature’s clock, and be patient (I know; this is a LOT of learning for me). Oh, and we have to work hard, too (luckily, I’m already good at that).

And, we really hate…

Btw, if anyone is looking for a good, free workout that comes with a tan and beer at the end of it, come on by and join Operation: Kickass!