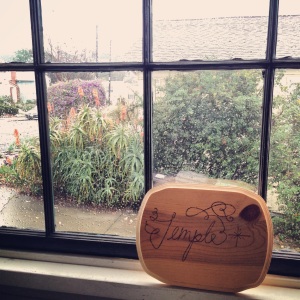 We’ve been in a heck of a drought here in California. The worst one in the state’s history – at least since we’ve been keeping records.

We’ve had less than three inches of rain in 2014 but, if you really trace it back, that’s actually less than three inches for the better part of a year now. What should have been our “wet season” arrived in November, but it was never really “wet.” Before that was our “dry season.” And it was indeed dry! Before that, the last real rain was… oh… sometime in April 2013?

This is the kind of news that keeps me awake at night. Lying alert worrying for the state of the planet, hopeful that every small noise I hear might be the tinkle of an un-forecast raindrop tumbling down the gutter outside our bedroom wall.

The drought even forced us to change the timetable for our backyard redo. Without any moisture, breaking ground in our clay soil would be nearly impossible. And then… a miracle at last!

It started to pour.

It’s been pouring for three days now, and I hope it doesn’t stop for at least three more. Even then, it won’t be enough to get us where we need to be, but it helps. And… We might be able to break ground on the yard in a few weeks as re-planned, and plant a few of the hardiest, most drought-tolerant species in our design.

I never thought I’d be so happy to be trapped in the house all weekend. KEEP IT COMING, MOTHER NATURE!