It’s the best day of the year for a little bookkeeping historian-at-heart like me:

The day I publish my year-end photo greeting. 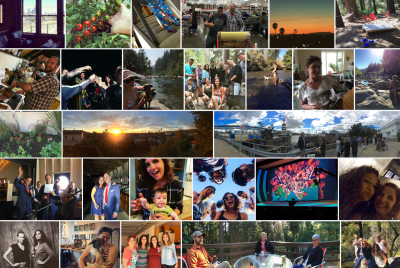 Click the pick for lots more on our Flick!

If you didn’t already get this in your email or see it somewhere on social media, this is our way of saying “hey!” at year’s end because we don’t do those paper greetings in the mail. It’s our greatest photo hits of the year, hopefully featuring MOST of our loved ones. We really want it to feature ALL of them… I’m hoping 2016 will be the year it finally comes to pass?
As I wrote to folks this morning, as I was reflecting on 2015 I kept coming back to this article I read about the Harvard Study of Adult Development. It’s basically been going on for 75 years now, these doctors and social scientists at Harvard studying people – some of them the same people, for 75 years – trying to figure out what leads to a fulfilling life.

I look at these photos in this set, and I see all the people keeping Trent and I happy and healthy, and I’m so grateful. I hope we’re doing the same for all of them.

This year was a huge one for us; it started out very, very difficult – sickness and death and job grief – and up until the midpoint it felt like we might both go off the deep end. But we hung on, in large part because of the support of everyone in the photos (and some unseen). In the end it turned out better than we could have ever hoped for: new jobs, new homes, promotions. I think my happy-cry in the kitchen of our new vacation cabin Labor Day weekend over breakfast with friends summed up how I’m feeling about life these days.

It’s all about the people (and the pups).

And so we wrap up 2015 with that in mind, and look forward to what we believe will be a pretty amazing 2016. We hope you all believe it, too.