Summer Shutdown was the stuff of dreams for a whirling dervish of stressiness like me.

As I sit here on my last evening shut down, getting organized to go back to work tomorrow and “processing” all my photos and follow up from an amazing ten days at my beautiful mountain home, I’m overcome with gratitude at being forced into time off at the peak of summer, along with every other person in my company. I had not a single ounce of work stress nor worry while I was away. I got to sleep in, go off the grid into the mountains every day, ignore my phone, ignore my email, and when I finally checked back in, there was NOTHING waiting for me.

Truly, nothing – I got eight emails over the span of ten days. EIGHT! That, in modern email terms, is a statistical ZERO.

That’s not to say I had absolutely NO stress, though… I am Lisa after all, and I can ALWAYS find something to stress about.

Namely, when we got to Arnold, on one of my routine find-things-to-stress-about passes around our property, I discovered that bark beetle had finally arrived in our ponderosa pine trees.

THIS IS A BIG DEAL.

These little f#@%ers are making their way north through California’s forests, chewing up all the big pines they can lay their eggs in. With their population booming in response to four years of drought, and abundant weak trees – their habitat and food supply – everywhere, they’ve devastated the forests of the southern Sierra and scientists think it’s only a matter of time before they reach the Oregon border.

Their presence is certainly felt now in Calaveras County; lucky for us, our home is located in an area of the Sierra not dominated by pine trees. We’re in the Stanislaus National Forest, backing to 20 open acres of land at an elevation covered mostly by old and new growth incense cedar, with some oak trees mixed in. Nevertheless, there are still giant, towering ponderosas here and there (including some along the road in front of our house), and it seems these giants’ time may have come.

My heart sank when I noticed the dozens of small oozing spots about ten feet up on the trunk of our biggest pine – the telltale sign of a beetle strike. After making my way around the property and, eventually, up and down the street, I found that EVERY pine in the area had been hit. All the ponderosas were most likely done for.

But not necessarily done for. You see, you can save a tree that’s only been attacked by bark beetle but not begun to die yet – trees that are still green, like ours. Not that I was even certain I wanted to save ours; doing battle against the mighty beetle might very well be futile, and not the kind of activity a whirling dervish of stress such as myself would be wise to undertake at a “vacation home.”

Still… The July 4th holiday is one I’ve long struggled to turn into a happy occasion in my life: one NOT about death. As a small girl, it was my beloved grandmother’s firework-infused birthday; then, after her untimely passing from cancer, I lost my grandfather just six months later on July 4th. And just a few years after that, my own father – their only son – died on the 1st. We buried him on the 4th, in the sticky, sickly humid Michigan summer. It was the worst, saddest day of my life, despite the many attempts to paint the fireworks going off during his wake as symbolic of his ascension to a better place, where the family would be reunited.

Perhaps you now understand why my gut reaction to spotting bark beetles was “Goddammit, my pine trees are NOT going die on the 4th of July now, too!” That is, not unless I WANT them to die because it’s the smarter, more ecologically (and financially) responsible thing to do.

I needed more information to make that call.

So how does one do battle against the beetle? Well, for starters, you call an arborist and get an estimate on how bad the beetle strike is. The arborist can identify trees strong enough to be injected with an insecticide that can kill beetles inside the bark (and keep it safe for a few years). Except…

In a state decimated by bark beetle, arborists are not easy to find. The forestry service, Cal-Fire, the next door neighbor, and a random real estate agent all basically told me “LOLZZZ!!!”

But I did get a random tip from a nice park ranger… “Call ahead of the beetles.” They’re coming from the south, so jump ahead of them by a couple counties to the north; see if an arborist in El Dorado or Placer counties will make the trip down.

So I made a few calls, and eventually I hit on a very nice arborist in El Dorado county who gave me the cell phone number of one of his crew who was out on the road and “probably willing” to make the almost two-hour drive to Arnold.

This arborist, Scot, was a super nice guy. I was a little surprised he agreed to do it, honestly. We spoke on Tuesday afternoon and by Friday AM he was at our house, inspecting our trees and giving us the skinny on which ones could be injected (a few of them, actually) and what it would take for the insecticide to work (a lot of constant water; not exactly going to be easy at a vacation home). There was no savings to be had – cut the trees down or inject them to save them, the costs were a wash.

But I honestly wasn’t as riveted to the conversation as I usually am (after all, problemsolving with contractors is my FAVORITE!). No joke – I was distracted by a very uncanny feeling that I had met Scot before.

And then he spotted the Old English D tattoo on my shoulder.

“Shut the front door. Where are you from?”

Within five minutes, Scot and I had determined that we grew up within a mile of each other. When he mentioned he lived in the neighborhood “next to Meijer on Sheldon, before they built Sheldon Center road,” I actually came to the realization that we might have grown up even closer than that… But it was so weird…

I let it pass. But I couldn’t put it out of my mind.

Later that day, Scot emailed me an estimate for injecting our trees. When I saw his last name on the email, my brain started to swirl.

I called my mother.

“Mom. Scot Haynes. What does that name mean to you?”

“You grew up with him on Crestmont. His parents, Ivan and Carol – they babysat you the night your sister was born. You kids were always playing outside together. What on earth made you think of him?”

“Well, it appears after not seeing him for twenty years, I moved 2,500 miles away, then a decade later I bought a house 2.5 hours away from there in the mountains, then a year later found out my trees were attacked by bark beetle, couldn’t find an arborist to come look at them, called a bunch of arborists two hours away from THERE, and…

HE IS THE ONE GUY WHO SHOWED UP AND LOOKED AT MY TREES TODAY.”

I immediately texted “Scot the Arborist”:

(I’ll get to the shark story on here some day; promise)

Wait – that’s how this happened.

Whether the trees live or die is not the issue. The trees had to get bark beetle so I could get this July 4th message from my past; from my father, from my glorious happy childhood on Crestmont with the gaggles of children always at my house, gathered around dad playing Munch Man on the TI 99 and cowboys and indians in the front yard and kickball in the back yard and running wild in the lawnmower maze he cut for us in the field they eventually mowed down to build Sheldon Center Road.

July 4th – the infamous time of sadness I battle with still, after so many years – continues its slow recycling into happiness, like green moss growing on a rotting tree trunk in a dark wood.

TFW is still here, always here, circling back in ways I would have never imagined.

TFW: Still with us after all these years.

Oh… And if you’re wondering what else we did on Summer Shutdown besides live out this epic adventure of trees and decades-old friendship and signs from the other side, well… 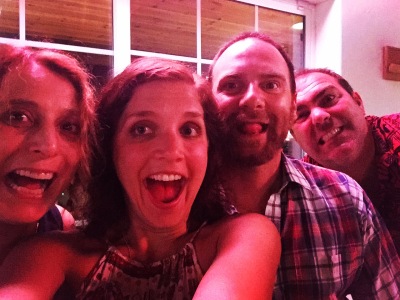 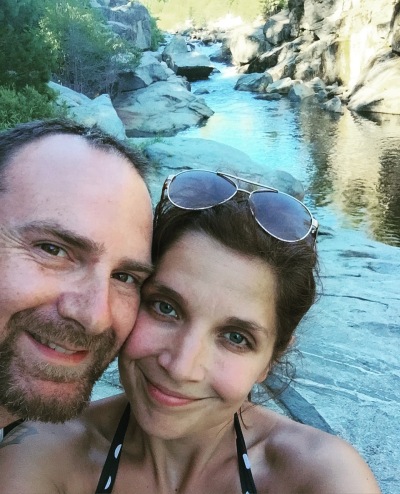 SUMMER SHUTDOWN IS THE BEEESSSTTT!

10 thoughts on “Starting Back Up”