Trent and I are officially “those people”:

You know – everyone has that one friend who throws the big Christmas thing every year. The thing you can count on to keep your friendship in good standing because even if you didn’t get to see each other all year long, you’re definitely going to be at the Christmas thing.

And I LOVE being the Christmas Party People!!!

I’m not sure why, exactly, we decided to throw our first Christmas party at 3675, five years ago now… It definitely could just be because I like to party? Does there have to be another reason?

Scenes from the first Christmas party at 3675, December 2013 (and huge props to Allison for that ugly sweater!).

I also love traditions, and so one party became two. S’mores over the annual “safety-not-first fire for toasting tasty things” became a tradition. Some tipsy holiday karaoke got added to the agenda.

And all of a sudden, five years have passed, and our house was overflowing last night with almost every friend, neighbor, colleague, former colleague… All the people in our lives that matter to us. Some we’d seen just last week, some we hadn’t seen for months. But they were all there.

And the karaoke was KILLER this year.

I makes me so happy to be the keeper of this tradition. The only thing that does not make me happy is cleaning up the mess the next day. 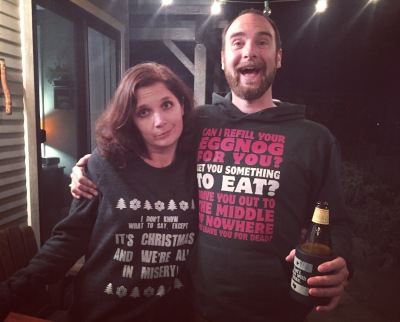 But it’s truly the only messy day in our house. So might as well make it big enough to last us a whole year!

One thought on “Five”